Greenwashing is a hot topic and hit the headlines recently when The Independent revealed that the number of adverts banned for “greenwashing” has tripled in a year.

But what does greenwashing mean? According to the Cambridge dictionary, to greenwash is to make people believe that your company is doing more to protect the environment than it really is.

When it comes to a business’s values, environmental issues are often top of the agenda for many in 2022, but it’s clear that the public are becoming savvy when it comes to CSR (corporate social responsibility) claims with regards to an organisation’s green credentials.

Below, we examine some businesses accused of greenwashing in an attempt to gain positive PR and look at an example of a brilliant business that is genuinely making a difference when it comes to climate change.

Ryanair is known for cheap flights and more recently for establishing one of the most talked about accounts on TikTok. In 2020 the Dublin-headquartered airline made the headlines for all the wrong reasons when announcing itself as Europe’s “lowest emissions airline.” The Advertising Standards Agency promptly banned these adverts as the claim was simply not true. To make this claim, the airline had pulled stats out from 2011 and not included some of the major airlines in their table of C02 emissions, as well as failing to factor in seating density.

Oil and gas giant Shell were left red faced and accused of gaslighting in 2020 when the social media team posted a poll asking followers if they were “willing to change to help reduce emissions.”

Under normal circumstances this would be a fair question, however given around 1-2% of global CO2 emissions come from Shell’s activities every year, while it continues to invest billions in oil and gas, this didn’t sit well with many. The queen of environmental campaigning herself, Greta Thunberg, even waded in on this one.

Shell’s poll and replies can be found here. 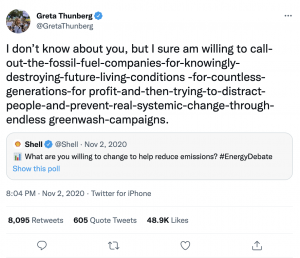 Perhaps it’s self-indulgent to mention one of Source PR’s own clients as an example of some good (or great, even if we say so ourselves) positive PR that is centred around an environmentally savvy business. We’re particularly proud of this one so we’re going to shout about it. Pura is a new client for Source PR and one that the team were excited to work on. Founded in 2020 by new parents and husband and wife duo Guy and Abi Fennell, Pura’s aim is to prevent baby wipe and nappy pollution by creating plastic free, biodegradable baby products. When the couple’s new baby Ezra arrived, Guy and Abi were shocked at the number of nappies and baby wipes that their new addition required every day and that ultimately end up in landfill.

After discovering that baby wipes containing plastic often take over 100 years to degrade and nappies up to 500 years, the pair have been on a mission to create positive change.

When Pura teamed up with Source PR, one of the first media announcements was an initiative supported by the Welsh government to resurface 1.4 miles of road with dirty nappies. Pura and nappy recycling experts NappiCycle teamed up in the resurfacing of the road between Cardigan and Aberystwyth.

Unsurprisingly this environmentally-friendly and innovative piece of news received regional and national media coverage from the likes of BBC News, ITV News, The Daily Mail and The Mirror. 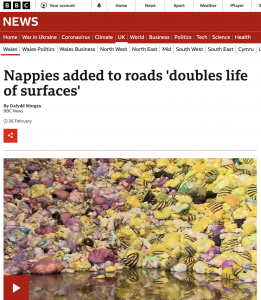 When you’re setting out to publicly talk about a particular cause, such as helping to save the planet, it’s crucial to critically examine claims and statistics in order to make sure you don’t end up creating a PR disaster over a PR coup.

Here at Source, we will make sure that you have nothing going on in your business that will contradict the claims you want to state before we speak out loud about them. This can make the difference between a PR crisis or a PR celebration.  If you think we could help you with your paid, earned, shared and owned media activity, then get in touch.