We’re all feeling the strain of self-isolation. Whether you’re working from home, a key worker rushed off your feet, or a hassled parent trying to keep your children entertained as well as educated, there’s nobody out there who hasn’t been in some way affected by the outbreak of COVID-19.

As the connected generation we are, one of the ways to keep in touch with wider friends and family that has boomed in popularity in the last two weeks has been the app Houseparty. A little like Skype or Zoom in nature, but with the added ability to play games with your friends, Houseparty has seen a surge in popularity as users look for new and interesting ways to keep in touch with friends far and wide. You can video or voice call with multiple people, do quizzes, draw with friends and chat with ease.

Keeping in contact with loved ones is a vital way of maintaining good mental health; experts put keeping in touch, caring for others and asking for help in the top 10 ways to look after your own mental health.

It looked like Houseparty, along with a few other niche companies, was going to enjoy a rapid increase in success from the COVID-19 outbreak.

That is, until yesterday, when reports from social media began to flood in accusing the app of hacking their social media and bank accounts. 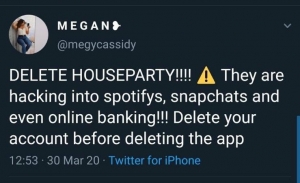 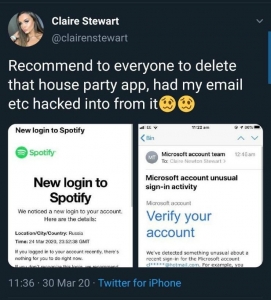 It’s not clear exactly how users thought they could tell the hacking attempts were due to Houseparty, but due to the online frenzy, users were rapidly deleting the app, and their accounts, instructing others to as well. 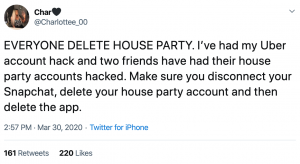 This couldn’t have come at a worse time for the company. The usage of Houseparty, since the coronavirus outbreak, has increased exponentially. Where once it was a blip in the download charts, it has now grown a worthy rival to Skype: though Zoom continues to eclipse them both. 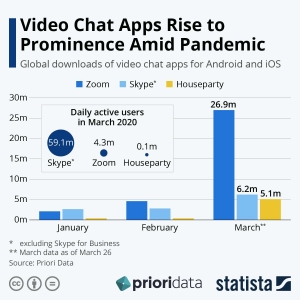 Google searches for Houseparty have also increased 100% in the past year – almost entirely in this month alone.

Houseparty has now alleged that the hacking rumours are a ‘dirty tricks smear campaign’, and are offering a huge $1m bounty for any proof of its app causing the issues users are said to be facing. A spokesperson for Epic Games, the owners of Houseparty, said, ‘We’ve found no evidence to suggest a link between Houseparty and the compromises of other unrelated accounts.’

THE POWER OF SOCIAL MEDIA

While social media has become an important tool in holding companies accountable for unethical or unsatisfactory practices, Houseparty’s confidence in its own app security suggests that this might well have been an orchestrated attack on an up-and-coming app.

Speculation has begun to arise on just who might be the perpetrator – but until there’s proof of exactly who it was, it seems that it’s safe to continue using the app.

Unfortunately, social media’s great power has the potential to be used with great irresponsibility, with no corporation or individual too big or small to come under its fire.

At Source, we understand the importance of best practices on social media, including how to avoid misuse and maintain professionalism. For advice on social media, digital marketing and PR, give us a call on 01829 720789, or follow us on Twitter (source_tweets), Instagram (prsource) and Facebook (Source PR).