Sunday saw one of the most momentous triumphs in English football history as the female England football team did what their male counterparts had been trying to do for over 50 years – they brought football home. The England V Germany Euro 2022 final was watched by a peak BBC television audience of 17.4 million (with a further 5.9m streams on iPlayer and BBC Sport), making it the most-watched women’s football match in UK-TV history.

This victory and the hype around it are the perfect opportunity to utilise the chance to truly champion sports for women and girls, and the outstanding performance of the Lionesses feels like it has been the beginning of a positive shift in the right direction.

The history of football in England

As many of us have learnt in the last week, the Football Association banned women playing the game in 1921 for 50 years. To put that into context, here are just some ground-breaking things that happened for women in the UK during that time period:

You catch my drift.

What makes this group of women’s victory even more special is that they have come from a generation where playing the game is not the norm. When you think about it, their mothers will likely have grown up as children and teenagers during the time the sport was banned for them. Not only have the England squad likely inspired a whole generation of girls (and boys, I hope) to play football, they’ve also called for the next Prime Minister to allow girls to  play football in school. Their open letter has been shared by the likes of Ian Wright, Rio Ferdinand and Jordan Henderson, using the hashtag #LetGirlsPlay. 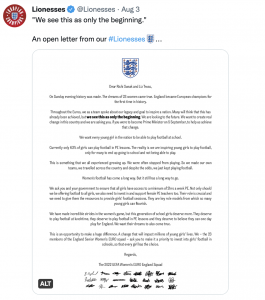 An open letter to the next PM

The amount of media coverage surrounding the England victory and its aftermath has been brilliant to see, as historically women’s sports receive only around four per cent of all sports media coverage, despite 40% of sports participants being women. It would be naive to think that this one event will now mean that media outlets start to equalise coverage of men and women’s sport, however it’s progressive and I hope it begins to create a shift and go towards helping with gender stereotypes.

Looking to the future

For many women, the win on Sunday wasn’t JUST about the football, but in fact another small step towards equality in all female sports on and off the pitch. In sports journalism, commentating, coaching, refereeing: the list goes on. I hope that this watershed moment will help to shape the present and future for women in sport and the media portrayal of women’s sport.

If you think the team at Source could help you score with your PR or media relations, get in touch!