This article first appeared in Creative Moment and was written by Janet Hare.

Poetry has been around for thousands of years and has given the UK alone heaps of famous and infamous poets such as Chaucer, Keats, Wordsworth, Dylan Thomas, Robbie Burns, Sylvia Plath and many, many more.

Typically though it is known as a niche market, with long-form novels selling far more copies than even the most popular poet. Although Nielsen BookScan did report a 12% increase in poetry book sales in its 2018 report.

Most people see poetry as something they had to learn at school and were pleased to leave behind as they reached adulthood.

And it’s definitely not known as the dominant written form in our lives today. That accolade probably belongs to text speak, alas.

So, if that is the case, then why is poetry being used so much these days in marketing and communications?

Many big UK brands and their ad agencies have taken to using poetry in their broadcast advertising over the last 12 months or so. Nationwide and Co-op are two such companies., as well as EE and OVO.

Starting in 2016, Nationwide ran a series of ads along the theme of ‘voices’ which were designed to highlight the life and diversity of British society. The campaign was brought to life by 31 spoken word poets who lived and worked across the UK. They were given broad themes to work from and wrote original poetry under the subjects such as home, family, friendship.

The campaign apparently helped the building society grow its share of switched accounts to 20%.

It was during that year that I first saw and heard Matt Abbott’s ‘This place is ours’, his poem for Nationwide on what home meant to him. It totally held me captive whilst he talked about his Mum’s roast dinner and dressing gowns being worn all day in his Yorkshire tones. This was real life. This spoke to me.

The Voices campaign has been so successful for Nationwide that it’s still running now. In 2020 it even featured poems about the Covid pandemic from the likes of Matt Abbott and his partner Maria Ferguson, titled ‘A message to ourselves/myself in 6 months’ time.’ The Covid-time ads focussed on the theme of how things would be different in the future. 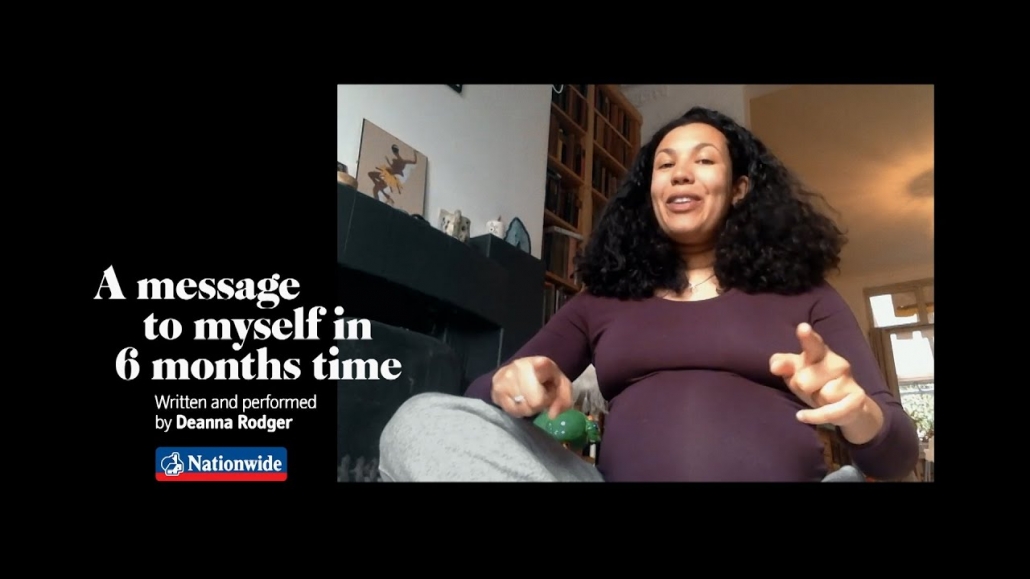 Since then, and particularly in the last 12 months, I have seen numerous other companies take to poems to express themselves in TV ads, such as the Co-op with its ‘Power of hope’ campaign which used a poem based on spoken word artist Sarah Adedeji, ‘All the people giving double’, about people’s struggles and double efforts during Covid. Even Coca-Cola has got in on the act using spoken word artist George the Poet in its TV ad marking the cultural significance of the pandemic.

So why? Why is poetry suddenly being used to communicate messages?

Advertisers and communicators recognise that people have turned introspective during the pandemic, spending more time contemplating. Contemplating what is important in life. And spending more time at home has given people more time to be aware of their feelings. They’ve had time to stop and think. Advertisers have recognised this. They have read the room and realised that empathy is where it’s at with good communication right now.

And it’s not only advertisers that have become aware of this. President Biden’s inauguration in the US didn’t just feature pomp and ceremony and politicians giving speeches and elbow bumps. It featured a young, black, female poet, Amanda Gorman delivering ‘The hill we climb’ poem she wrote for the occasion.

In the hours following the ceremony, social media erupted with astonishment at how powerful the poem was and how amazing Amanda, the US youth poet laureate, was in her delivery. The positive media coverage continued the next day and beyond. The impact it made was incredible.

Why did the Biden administration decide to use poetry for this world-stage event? Because they read the room and knew with all the turbulent times the country had seen, what they needed to do now to appeal to the population was show what hadn’t been shown before. Empathy.

I fully expect that Amanda Gorman’s performance will only further propel the use of poetry in communication and as an English Literature grad, that’s something that I look forward to very much.