If you’ve been anywhere near social media within the last week or so, you’ll have noticed that there’s something of an unexpected war going on between two beloved supermarket brands at the moment: M&S, the British retailer, has launched a court case against German supermarket Aldi for allegedly imitating its birthday cake, Colin the caterpillar, with its own version, Cuthbert.

It’s an unusual case for many reasons, with the first being that Aldi is known for copying other, ‘official’ brands, and replacing them with a similarly-designed, cheaper alternative. The retailer has thus far evaded a case like this, which begs the question: why this product in particular?

Another question remains: why target Aldi for a lawsuit when there are many other retailers, including ASDA, Tesco, Sainsbury’s and Waitrose, that all have caterpillar cakes too?

Some people have theorised that the ‘lawsuit’ is actually a collaboration between the two supermarkets to generate publicity for their respective brands. Though a court case is an unconventional way to generate PR, there are instances in which the attention brought by the companies involved has ensured the brand name has been given an amount of exposure that would rival a typical PR campaign. McVitie’s court case regarding the categorisation of a Jaffa Cake as a ‘cake’, which was initially a ‘biscuit’, started the now well-known debate of which category the confection lies in.

Similarly, a 12-year-long case also involved M&S regarding whether or not a ‘teacake’ was classed as a cake or a biscuit (the retailer ultimately winning their case).

Eagle-eyed M&S shoppers have also pointed out the new abundance of Colin products, such as mini cakes, sour sweets and gift bags, as well as children’s clothing and a Connie Caterpillar cake, supporting the fact that the company is definitely going big on all things caterpillar right now. Though a court case sounds like a stretch in terms of marketing tactics, stranger things have happened in the world of PR.

However, in the opinion of Rebecca Jane writing in the Burnley Express, the case is a legitimate one due to the extent of the similarities between Colin and Cuthbert, compared to the cakes made by the other supermarkets. ‘If you compare them all, they have fundamental differences – except for Aldi’s. The Aldi cake is almost identical to Marks and Spencer, and that’s where Aldi’s defence will fall down. In law land, in my belief, it is called ‘passing off’. Therefore, M&S will win.’

So it seems M&S are indeed willing to go to bat over these similarities: but is the lawsuit worth the poor PR generated?

Battle of the brands

The case has provoked Aldi’s social media team to take things by the reigns, providing an endless stream of jokes and memes regarding the sticky situation… 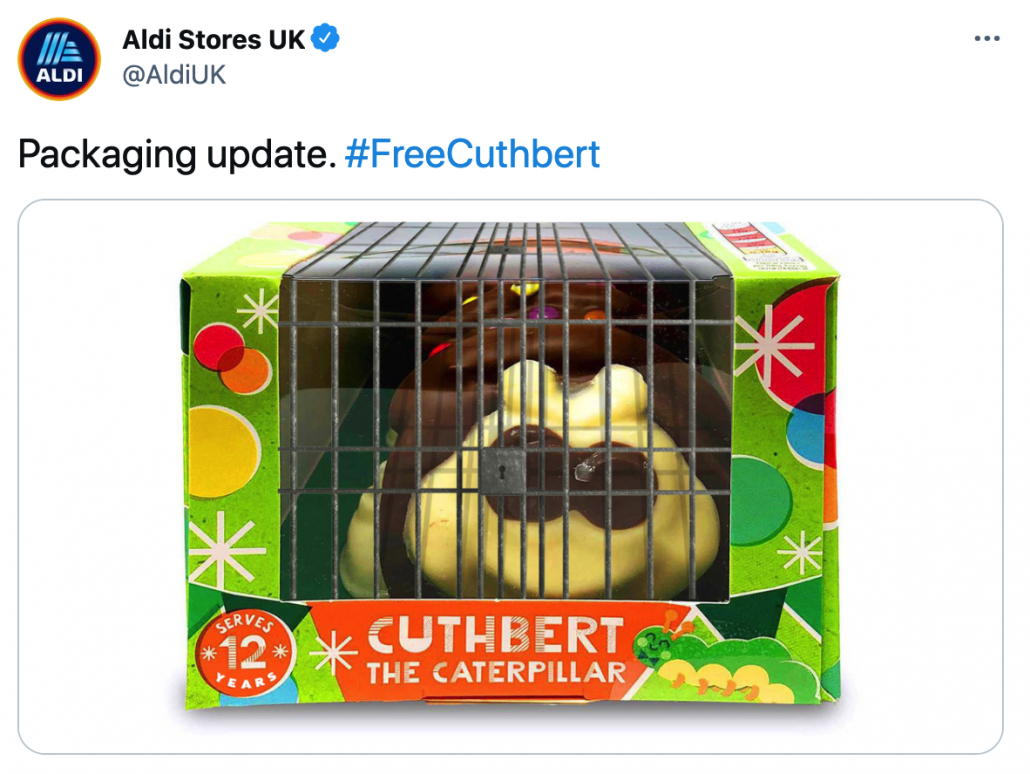 Aldi has been known to poke fun at other brands on Twitter, such as the IPA company Brewdog and, more recently, Dulux paint, due to its own hiccup involving its new sponsorship of Tottenham Hotspur. Its approach to social media, with tongue-in-cheek jokes and references to other brands, far surpasses that of M&S, who has so far stuck to its guns and have kept pretty quiet on Twitter regarding the case.

It all came to a head on Twitter on Tuesday, when Aldi took M&S to task in its most tactical move yet: 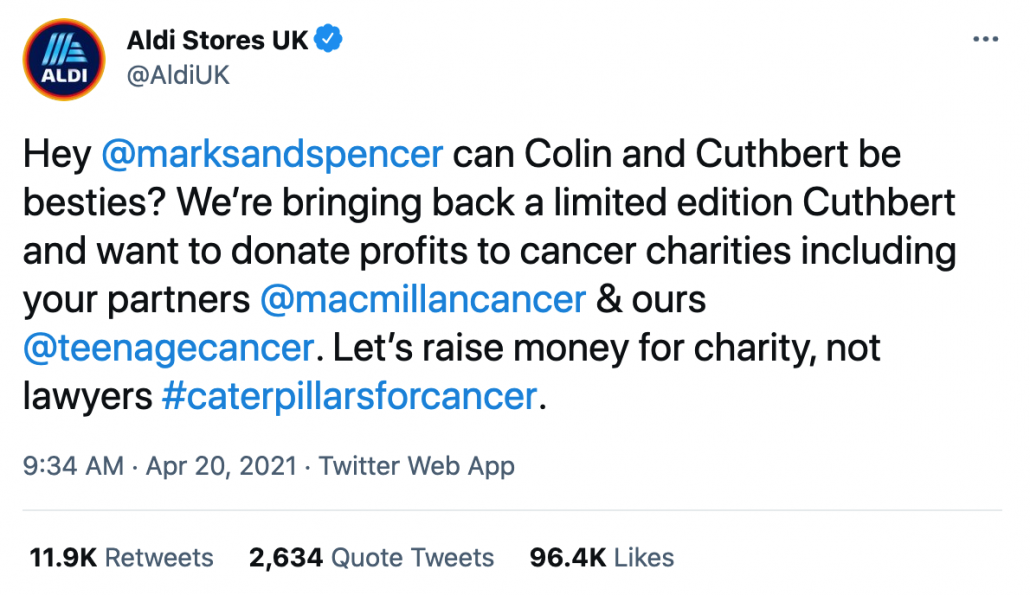 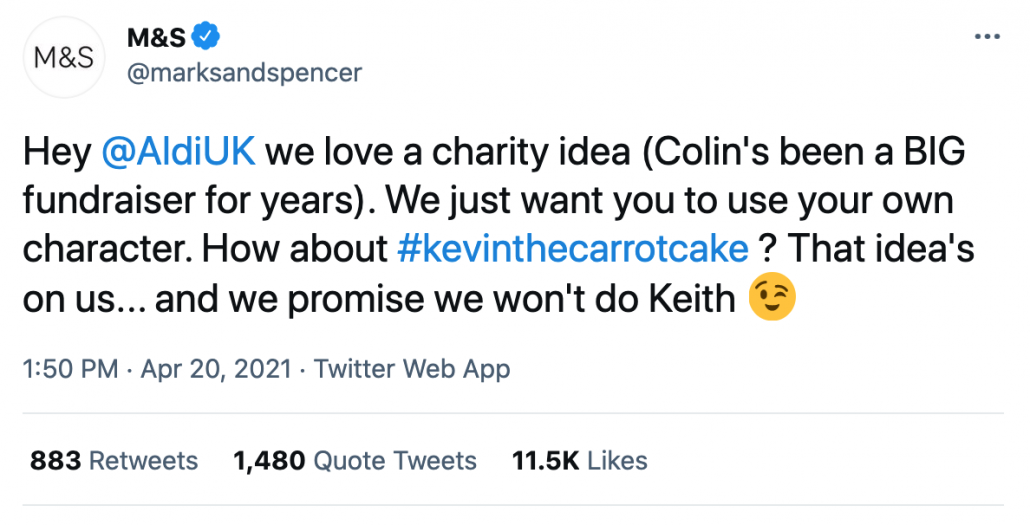 M&S’s response clearly tried to invoke the teasing approach Aldi has so far perfected, but turning down an offer of a collaboration for charity was never going to look good. Aldi has boxed them in a corner here: if M&S do indeed win the case, as predicted by Rebecca Jane, it would be a poor move for its image to keep the money it wins as opposed to donating it to Macmillan.

However, in the other corner, some believe that ‘playing the charity card’ was in bad taste by Aldi and over-stepped the line.

At the end of the day, was it even worth challenging the supermarket in court over such a petty difference? The fallout might just mean shoppers choose the cheaper, similar alternative, as the case seems to have done little but draw attention to the fact that shoppers can get an identical version of the cake for less!

A final note: these are the Google search trends for the respective products over the last 30 days. Only the sales of the products will determine the true effects of the trial, however, it looks like, for now, Colin is still very much the king of the cakes… 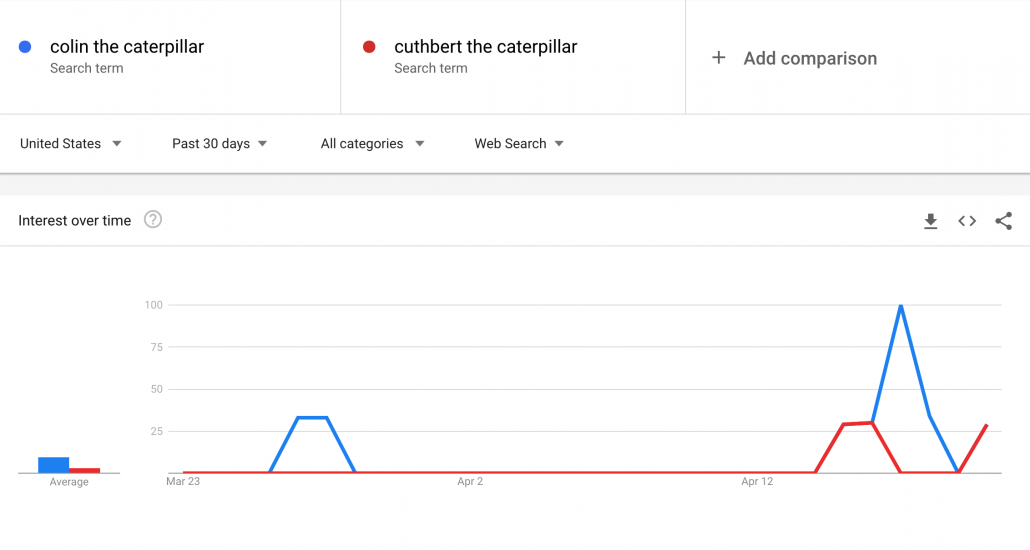 Time will tell how the case plays out: who knew children’s birthday cake could be so complicated?!

At Source, we know how best to put your brand’s name out there without any hassle. We have over ten years’ experience in PR, digital marketing and communications, including crisis comms: why not give us a call on 01829 72078, or get in touch with us via our Twitter, Facebook, Instagram or LinkedIn?

As we approach the end of Lockdown Mark III, the government believes that the UK economy will bounce back like a ‘coiled spring’. The question is, are you ready for a return to normality, what are you doing to prepare yourselves and have you got their marketing strategy in place to maximise opportunities? If not, now is the time to take action before it’s too late.

The Bank of England suggests that consumer spending is set to surge with that the British public having saved as much as £250 billion while being locked up. Restaurants, pubs and bars are the likely immediate benefactors as well as UK holiday providers, but all these industries have suppliers and employ people who, who when earning again, will look to treat themselves after months of curtailment.

We have talked earlier about the importance of maintaining a marketing presence during lockdown and have an excellent case study of Combermere Abbey, one of the region’s leading wedding venues and accommodation providers, on how they managed it so well. The case study shows how the business was forced to close due to the Covid restrictions but rather than twiddle thumbs, took proactive measures so they were well placed to take advantage when the lockdown was lifted.

Businesses preparing for the lifting of what is believed to be the ‘last lockdown’ should also consider how the economy has been permanently altered since March 2020. Consumer spending habits, lifestyles and trends have been shifted online, people have adopted new hobbies and outlooks, and it is hard to see how the high street can bounce back without innovation or embracing more digital opportunities.

It is not just the hospitality and retail industries that is expected to bounce back, but house builders and construction industries are also likely to benefit as people look to either move home or make renovations following months of being in lockdown. A report from our client Miller Homes suggests that lifestyles have been changed by the pandemic with more home working or a demand for more outdoor space. These new ways of living and working present clear marketing opportunities.

The use of social media has also grown significantly as users feel that they have a safe space to interact, be entertained, distract themselves, and find inspiration without any risk of contagion. July 2020 saw a rise of 10.5% in social media usage, compared with July 2019, according to a GlobalWebIndex survey. Some 46% of women and 41% of men said they’ve spent more time on social media during the pandemic, making it the second-most popular digital activity.

Businesses should alter their marketing approach to reflect this and have a marketing and social media strategy in place that maximises the opportunities presented. It’s likely that the space will remain competitive and it will be the brands that have relationships with their customers and who are able to excite, entice and engage that will come out strongest.

If you’re looking for a PR or marketing strategy, the team would be delighted to have a chat to understand where you are, what the vision is and to help pull plans together so you can get there. The end of the ‘last lockdown’ is fast approaching, make sure you are ready like a ‘coiled spring’ to take your opportunities.