It’s safe to say that the pandemic has shown employees all over the world their workplace’s true colours. The range of response from managers, bosses and directors has been enormous: from some workplaces forcing their employees to download tracking applications that monitor their every move, to others fully embracing the opportunity to let their staff work from home, encouraging flexibility and independence. (We’re happy to state that Source PR is in the latter category!) Naturally, business owners want to ensure their staff are still working effectively, but the lengths some go to have the potential to negatively impact the mental health of an already-fragile workforce.

The treatment of staff by businesses goes a long way in terms of marketing purposes: companies such as Google, Ben and Jerry’s and Innocent Smoothies have made a name for themselves with their relaxed approach to workspaces. Google’s workspaces include their infamous nap pods, in which employees are encouraged to isolate themselves inside when they’re feeling drowsy, slides and ping-pong tables. Ben and Jerry’s also incorporate ‘nap times’ into their work day, and Innocent’s London headquarters is coated in artificial grass and coffee-shop style benches, accompanied by a total absence of dress code – meaning there’s not a power suit in sight.

But do all of these so-called ‘perks’ – frequently cited on job websites in lieu of an actual salary in black-and-white – have the ability to make a happier and more productive workforce? Or are they simply opportunities for brands to appear ‘youthful’, fun-loving and innovative, all whilst sidestepping fair wages, effective HR protocol and – in the US – healthcare benefits?

I recently saw an Instagram post from the vegan food company ‘THIS’, which gave a refreshingly honest account of the cost of living in London – where its headquarters are – which is escalating far higher than wages can keep up with: particularly entry-level wages.

The post announces that the company will give each employee a starting salary of £35,000, as “life on £18k a year in London is massively crap.” 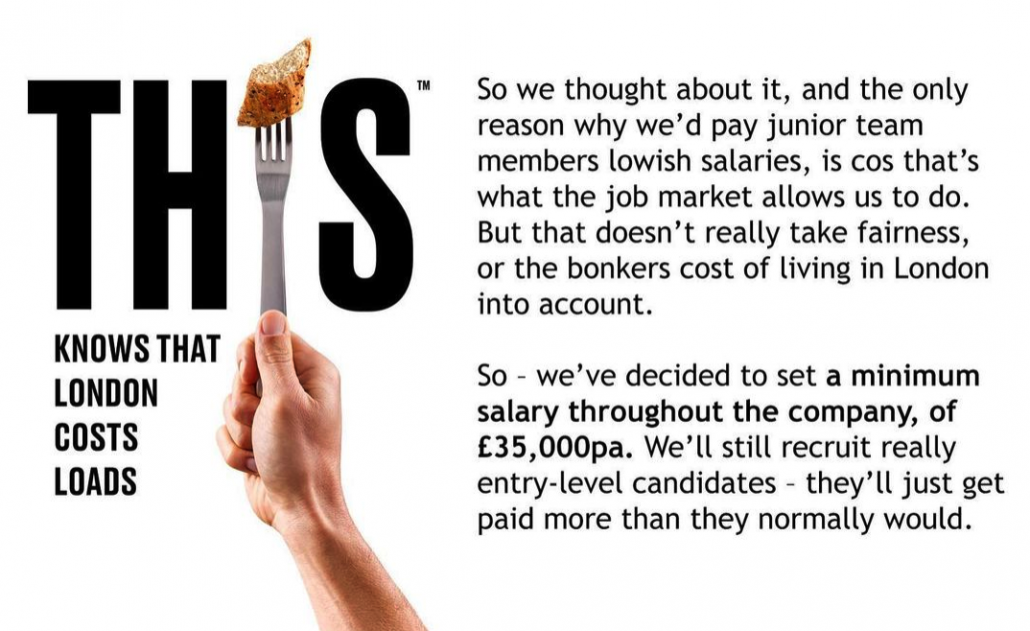 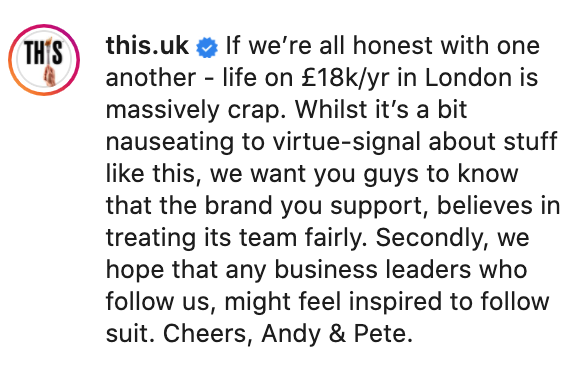 By posting their news in a simple Instagram post – with little fanfare and fuss, and an emphasis on its desire to avoid ‘nauseating virtue-signal[ing]’ – THIS ensures that its followers know its intentions are not to generate as much buzz possible (a quick Google shows that they didn’t distribute a press release) but to inform them of their brand values. That’s not even mentioning the pay rise itself, which is a huge leap for a two-year old vegan food company, and will doubtlessly come as a welcome surprise to its employees.

The post is its most-liked by a country mile, with over 23,000 likes, in comparison to its average of 1,000-3,000 per post – meaning that the good news has generated more than its fair share of positive, organic PR. I’d never heard of THIS before seeing the post in question shared on friends’ Instagram stories, but now follow the page and, as a vegetarian, will definitely be checking the range out!

It just goes to show that tangible perks – in this case, a fair wage by London standards – help generate buzz in the way that Google’s playground offices (now yesterday’s news) initially did.

The price is right

Another example of not only good PR, but increased revenue that has been generated by tangible increases in workplace benefits, is the story of Dan Price, owner of Seattle card payment company Gravity Payments. After reading a study on the salary that Americans needed to be at their happiest – approximately $70,000 – Price decided this would be the minimum salary of every member of staff. This would require him to take a humongous $1m pay cut if he were to give this to all 120 of his employees.

However, implementing the pay rise across the board proved to be beneficial to say the least. The employee headcount at the company has doubled, with applicants naturally flooding to the business with their CVs in hand, and payments processed by Gravity rose from $3.8bn to $10.2bn due to the increased, and highly motivated, workforce.

After the success of his experiment, Price has featured on CNN, the Kelly Clarkson Show and Democratic nominee Andrew Yang’s podcast: all generating excellent PR for Gravity Payments, which by this point had received plenty. (His employees also all chipped in to buy him a Tesla!)

By contrast, during the last few years, Google has been plagued with defamatory headlines: earlier this year, more than 200 Google employees formed the company’s first union demanding, amongst other things, fair wages, and the ability to work without fear of discrimination. The company is also currently battling three antitrust lawsuits, and in 2018 was subjected to global protests after numerous allegations of sexual misconduct were uncovered at the company.

Though a huge, global corporation like Google is naturally going to generate a mixed bag of positive and negative coverage, it’s clear that it has placed more of an emphasis on its image to attract employees as opposed to real benefits – a tenuous provision in the age of social justice and activism, that, consequently, has only worsened its reputation and allowed for damaging headlines and coverage.

It’s wise to want to project a positive image of your business, but authenticity and transparency are fail-safe ways of ensuring the ‘bubble’ never bursts. And if that means more employee satisfaction surveys and fewer ping-pong tables, it might be for the best for everyone involved – your brand included.

At Source, we know a thing or two about how best to present your company to the world. We have over ten years’ experience in PR, digital marketing and communications, including crisis comms: why not give us a call on 01829 72078, or get in touch with us via our Twitter, Facebook, Instagram or LinkedIn?