Much has been made of this year’s Love Island. Since around springtime this year, long-time fans called out their desperation for the seventh season. With this being the first summer series since 2019, combined with a slightly delayed release this year, the anticipation for Love Island could not have been more fervent. Let’s be honest – we were all looking forward to hearing “can I pull you for a chat?”, a heated row or two around the fire pit, and curveball bombshells that come in with the express purpose of tearing apart a new and delicately-formed kinship. After the last eighteen months we’ve had, we craved the escapism of Majorca, a place the majority of us couldn’t make our way to for obvious reasons.

Yet despite the anticipation, this year’s offering seemed to fizzle out almost immediately after its inception. Islanders simply weren’t gelling with one another, playing it safe, or exhaustively professing their love for one type of girl: ‘blonde.’ After an underwhelming finale, in which Liam and Millie were the winners, various claims swarmed the internet that the show had “lost its magic.” Those of us who watched in the early days might be surprised that such a behemoth of television has hit a seven-year itch, but it was perhaps inevitable… Cult shows like Big Brother no longer hold the public’s attention like they did back in the early 2000s.

Unlike Big Brother, which simply became part of Britain’s cultural furniture and therefore was seen as less and less controversial (so, arguably, less compulsive viewing), part of Love Island’s decreasing appeal is the way in which every aspect of the show has become hyper-marketed. From the contestants themselves, to the products they use – everything seems tailored to have the viewer putting something in their online shopping basket by the end of each episode.

That’s not to say brands are unwise to work with Love Island contestants, and influencers in general. Quite the opposite: it’s literally a million-dollar idea. Why not work with ‘normal’ people who have recently had internet fame imposed upon them to promote your product or service? We’re well-versed with helping businesses work with influencers, and the results are almost always fruitful.

Too much of a good thing

The problem is that it is such a good idea that everyone wants a slice of the pie. We’ve now ended up in a situation where the over-saturation of the Instagram-influencer-slash-fast-fashion-brand-ambassador is having viewers tuning out, turning off and unfollowing. This year’s show saw a dramatic drop in viewers, with Love Island’s initial 6 million viewership per episode having halved by the final weeks – a far cry from its peak in usual seasons, which was around 7 million viewers per episode. Likewise, the largest Instagram followings amassed this year were by Liberty Poole and Millie Court, both at 1.1 million. But these pale into comparison when it comes to Molly Mae Hague, who left 2019’s show with a huge 2.5m followers (however, do remember that she was an influencer and YouTuber prior to appearing on it). Lucinda Strafford, who arrived mid-season, was so transparently in the villa for a fashion brand deal according to Twitter users that a flurry of memes followed her exit from the show. 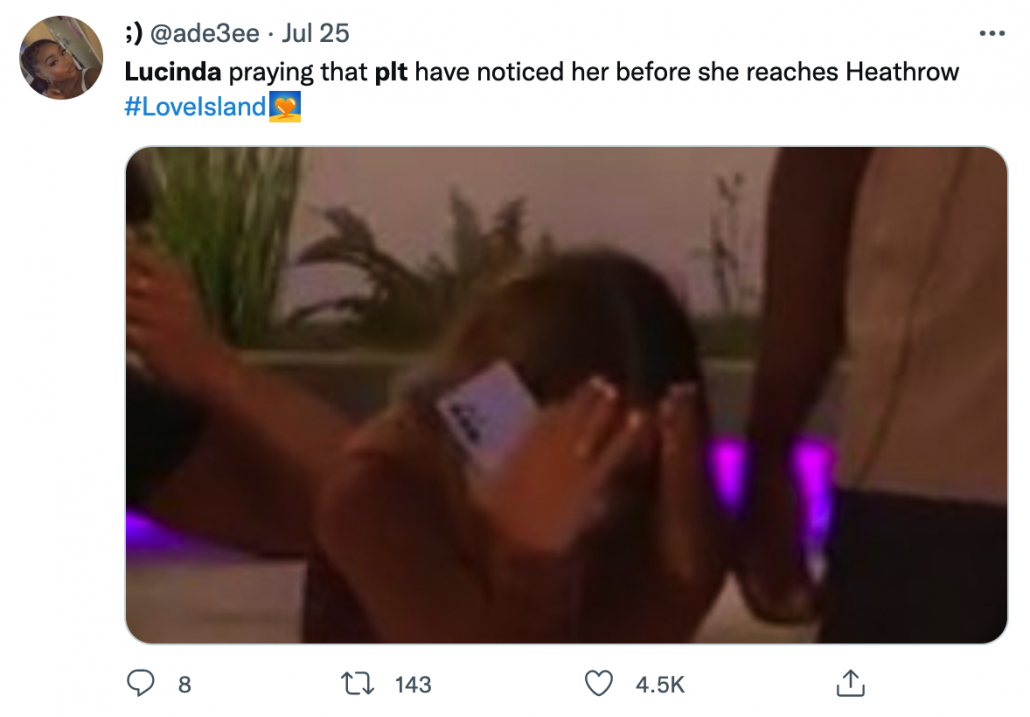 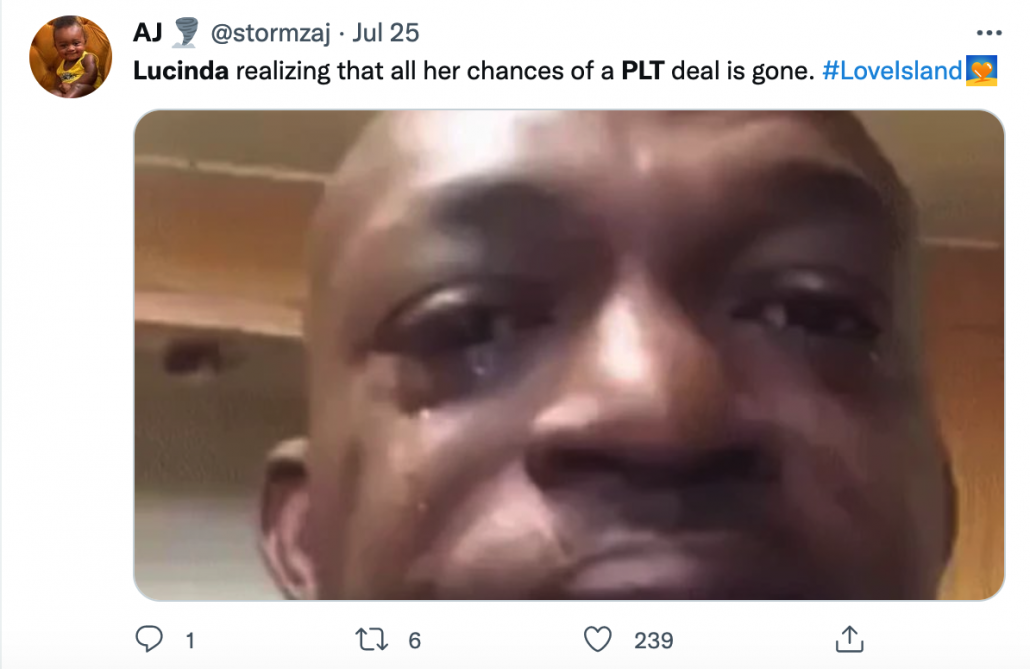 Lucinda has since snapped up a deal with sister brand I Saw It First after being voted off the show.

People like authenticity. Typically, the influencers that do the best on the outside world are the ones who do the least brand promotion. Some speculate that part of Molly Mae’s success, for example, is that she doesn’t go down the route of peddling any old product the way that other influencers have been known to such as diet pills and CBD gummies, the scientific effects of which tend to be dubious. TikTokker Manrika Khaira, who appeared on Channel 4’s The Circle earlier this year and who has over 400,000 followers on the platform, works only occasionally with brands, and stresses to her followers that nothing she promotes is something she wouldn’t use herself.

On the flip side of the coin, last year, YouTuber Jack Dean paid former Islanders to promote his fake moisturiser brand, which they needed little encouragement to do, claiming that they’d been using the moisturiser for a long time and explaining all of the supposed benefits. The video has since hit over a million views. Exposés like these that reveal the cracks in the veneer of influencer-dom. Since the inception of Love Island, the British public has been sold a lifestyle of free products, brand partnerships and gifted getaways – it makes complete sense that, seven years down the line, the desire to find love has been eclipsed by the desire for fame and money.

So how has this affected the public’s perception of the show, other than the decrease in viewership?

My lovely colleague at Source, Jess, put out a poll on Twitter to her 3,000+ followers to ask them how they felt effectively marketed to by Love Island. Their responses were very clearly in favour of the more subtle marketing of the previous years’ series, as opposed to the much more obvious zoom-ins, strategic placements and sponsorships of the current year. 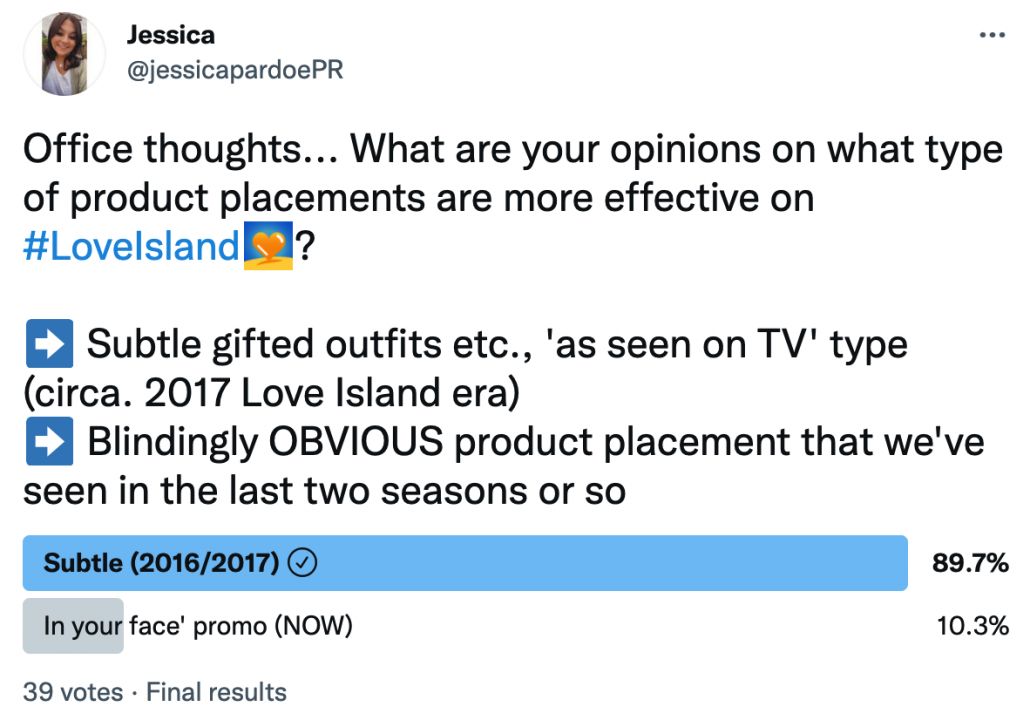 The fatigue with Love Island, and influencers in general, was always going to happen sooner or later. But brands should think carefully as to whether or not the idea of working with fresh-face influencers has lost its novelty or not – and whether or not viewers find the persistency of their presence in the show annoying enough to avoid their products altogether. At the end of the day, viewers and social media users are far more likely to buy a product when it has come from a reputable source: not simply because someone they saw on television for a few weeks tells them to in a sponsored post. This brings to mind the astonishing statistic that as many as 92% of us buy from brands based on the (honest) opinions of friends of family. As ever, authenticity is key!

At Source, we know a thing or two about working with influencers, bloggers and more, and how it can work best for you and your businesses. Give us a call today on 01829 720789 to talk to one of our experienced team members.